The sun was beginning to get low in the sky. It seemed it would be a little sketchy to start our hike now, since it says at the beginning of the trail to start earlier. But my hubby was confident we could handle it. It was my hubby, our dog, and I that would conquer this oh so famous rock! Nothing would stand in our way!

We had our dinner one of the backpacks and two water bottles. Staying hydrated while hiking is essential. One backpack held the food, emergency kit, and rain jackets. The other, was to hold a doggie. We wanted to try it out before we get to the real long and hard hikes. This seemed a good one to try it out on. This was one of our first hikes on this trip, so my body wasn’t fully ready for hiking. But my movements became fluid quickly as we ascended up the mountain.

The stony pathways were indescribable. Their beauty made it feel as though we were far far away from civilian. Even with some of the pathways being stone steps. Our dog would excitedly run to and fro. If we saw anyone on the trail, we would harness him. Otherwise, he stayed pretty near to us and wouldn’t venture off the path. All the new smells excited him and he would look at us with love and wonderment in his eyes. His tongue lolled as he began to pant.

It was beginning to get cooler, but the sun was still shining brightly. It has always been its own journey to try and keep up with that husband of mine. He’s a fast pace hiker, which sometimes I don’t mind. But the other times, I would like to enjoy the entire hike. Especially if we are surrounded by picturesque nature. He brought down his speed for me a little, so we were in yelling distance.

Our hike up didn’t have but one other guy going up. We had a few groups that passed us as they descended towards the base of the trail. Smiles covered their faces and I could imagine the view from the top. The wind whipping in my face, cooling me down. Taking in the lake that would look so far away as we neared the edge.

Reality came back as my hubby yelled from a distance, “You coming?!”

I hurriedly got out of my head and picked up my pace to catch up with him and our doggie. Every turn we made was beautiful. One side was a stone wall that matched the stone path and the other side was filled with greenery. The higher we got, it all became one with the stony trail. Now, we are on nothing but rock. Each step was hard grey stone that held so much history.

Once we made it to the top, that’s when the view filled my vision. We were so high up! Oh, by the way, I’m afraid of heights! But I don’t want that to hold me back! This is something I wanted to see. I crept closer to the side and it felt as though I was looking at a realistic painting. Below was a sailboat in the lake. I thought about the person on the boat. It’s a voyager getting ready to fight a troll who had stolen her child. Axes and swords sprawled out on deck. I began to get too close to the edge. A panic overtook me and I pushed myself back. Every nerve in my body was shooting feelings out. My heart was pounding, but I told myself to calm down.

After we checked the top, my hubby and I started snapping shots of the view. Being the daredevil he is, my man had to get higher up so he could get an epic picture of the Pulpit Rock. I protested, I could only think of all the bad outcomes of him climbing the side of the mountain. But I knew, he wouldn’t listen to me. The whole time he was up there, I felt my heart hammering in my chest. He took many photos of me and of the area from that view. They were amazing, and what made me the happiest, he came down unscathed! Phew! We were lucky to have the top with only a handful of people.

The best part of this hike was when we went down. It was time for the sunset and it filled the rocks and grey tones with colors. It filled the area with the last light it had. As it slowly went down, the trail was almost like a new one. We made it to the bottom with light still remaining in the sky. I think it took us around 4-5 hours in total. Definitely a hike worth it!

Check out Pulpit Rock in Norway! It’s in the Hardangervidda National Park and has been known as one of the famous rocks in Norway.

Check out https://misfitwanders.com/ for more of my adventures while traveling! 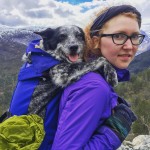 View all posts by Dani James →

Surprise trip to Fladen in Norway

One thought on “Pulpit Rock in Norway”